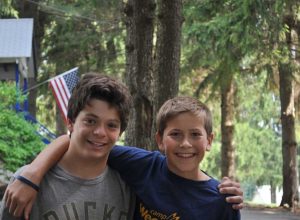 My older brother started going to camp when he was younger, and I remember picking him up from the bus up at the end of the summer each year and being so excited to hear about all of the things he got to do. I was beyond excited when it was finally my turn to spend the summer at camp, I was ready to experience camp for myself!

I spent my first summer at hiking, mountain biking, climbing, team building, friend making, s’more eating, lacrosse playing and fishing. But one summer was not enough. I made it very clear on the drive home that first summer that I HAD to go back next summer, and I would do whatever it took to get back there!

I explained to her that first and foremost, I wanted to go back and see all of my friends. I got to camp and didn’t know anyone, and was a little timid about just walking up to a group of people and introducing myself. But lucky for me, Jack, a camp counselor, swooped in and saw that I was a little nervous, and made me feel right at home. He introduced me to some other kids who were there for the first time, and right away we all clicked. All summer long I was involved in sports and games, and it became easier and easier to make new friends. The other campers in my bunk really became close friends. We talked a lot, supported each other when we were missing home, and it was nice to be able to look around camp and find a smiling face waving at you to come over and sit by them. I felt included at camp, and when it was time to go, I was really sad to leave them. Thankfully, we shared phone numbers and email addresses and plan to keep in touch throughout the school year, and we made promises to reconnect next summer at camp. I can’t wait to see them all again!

I also explained that even though my summer days were packed with fun and adventure, there are still so many things that I didn’t get to try that I really want to. I want to get back to camp to try archery and overnight camping. I want to dabble in some of the more “artsy” programs available at camp, like music production or hip hop dance. I want to go back and re-do some of my favorite activities, like wakeboarding and golf. It’s amazing how you can wake up early and go to bed late, spend your entire day on the go, and still not do everything that the camp has to offer!

And, as if those things weren’t enough, I told her that I want to go back to camp because it feels like I’m part of something. It’s that feeling of belonging to a team, where everyone looks out for everyone else, where you feel important and included, and where other people support you and cheer for you. There is something different about my camp friends and my school friends. My camp friends and I have been through something special together. We’ve participated in camp traditions; we have a special bond that other friends just don’t have. I feel like I’m part of something bigger when I’m at camp, and it is another reason why I really want to go back.

My little sister has started counting down the days until she can have her first camp experience, and I know that just like my brother and I, she will have many reasons to return to camp year after year!