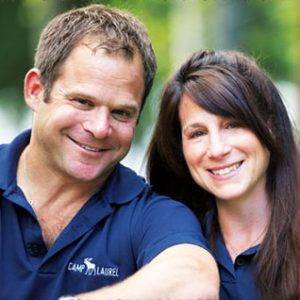 Jem started as a camper at Laurel in 1980, went on to be a counselor, Campus Leader and now serves as Director with his wife Debbie. Jem is a graduate of Union College where he was a varsity soccer player and captain of the Alpine Ski Team. He is actively involved with the American Camp Association and is a former member of the Tri-State Camping Conference Steering Committee. Jem is a member of the Board of Maine Summer Camps, Maine Youth Camping Foundation and Temple B’nai Chaim in Georgetown, Connecticut. A native of Westport, Connecticut, Jem assumed the directorship of a soccer camp in Fairfield County when he was just 19 and found his calling. Jem lives in Weston, Connecticut with his wife Debbie and daughters Anabel (Laurel camper), Madeline (Laurel camper) and Tess (CIT – Camper in Training).

Debbie became a Director of Camp Laurel in 2007 and has spent every summer since 1998 (the year she and Jem met) in Maine. She works closely with the Head Counselors, staff and campers, focusing on camper and staff relations. Debbie hails from Baltimore, Maryland, where she attended the Park School and was a member of the varsity lacrosse and field hockey teams. A graduate of the University of Texas at Austin, Debbie is a Certified Social Worker and a graduate of Yeshiva University’s Wurzweiler School of Social Work. She is training at the Ackerman Institute in New York City to become a family therapist. Debbie is on the board of the Foundation for Jewish Camp. 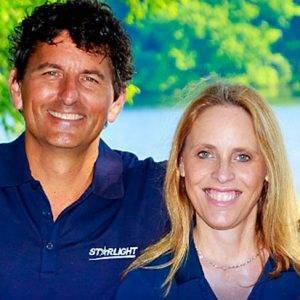 David, a native of Newton, Massachusetts grew up as a camper in Maine, where he spent 12 summers as a camper, counselor, Hockey Specialist and Division Head. He graduated from New York University and, prior to entering the camping industry, worked in the entertainment industry as a casting director, talent manager, and independent film producer. His lifelong dream to be a director of a summer camp became a reality in 1999 when he purchased Camp Starlight. He currently resides in Florida with his wife Allison and his two children Hayley and Griffin.

Allison, originally from Old Westbury, N.Y., focuses on camp operations and administration as well as staff and camper relations. She graduated from N.Y.U. and then earned a law degree from Cardozo School of Law. She spent her legal career as an associate at a prestigious national law firm and served as in-house counsel at a major auction house. She later became V.P., Head of Human Resources for that same company, where she was responsible for hiring, training, and development of the North and South American staff. However, she sees her role as the mother of two children, Hayley and Griffin, as the most valuable experience she brings to Camp Starlight.

We’ve enjoyed many years in camping and education as both directors and coaches. We directed prestigious camps for both girls and boys in New England for 7 years. Prior to joining the camp world, Kate spent 4 years directing a dorm and coaching at Northfield Mt. Hermon, earned a Masters of Education from Harvard, and was a three time captain of the Dartmouth women’s soccer team. 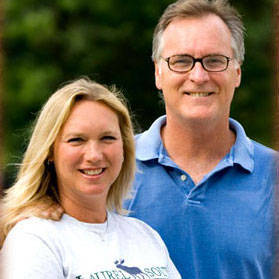 Laurel South’s Directors are Roger and Dagni Christian. Roger and Dagni each have a Bachelor’s Degree in Elementary Education. Additionally, Roger has a Master’s Degree in Educational Leadership. They are very committed to working with children and have more than 25 years of camp experience. Roger and Dagni’s ability to motivate campers and staff, combined with their patience, warmth and skill in relating to campers and parents, make them a highly qualified and enthusiastic pair. They are members of the American Camp Association (ACA) and the Maine Camping Association. Roger currently serves as a Standards Visitor for the ACA. Roger and Dagni have two children.