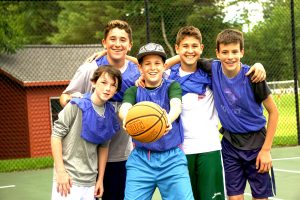 It doesn’t seem like too long ago when the first iPhone came out, or when wifi started to become mainstream; those were 10 and 20 years ago respectively. As the world evolves and technology progresses, the importance of camp increases exponentially. Kids today are growing up in a significantly more technological world than the one their parents grew up in; a world where they need camp now more than ever. Here’s just a few reasons why:

Camp Teaches Kids How to Interact

The days of calling a friend’s house phone and saying “Hello Mr./Mrs. Smith is John home?” are over. Kids are getting cell phones at a younger age and have mastered the ability to interface through texting, Snapchat, Instagram…the list goes on and on. Through these constant and instantaneous interactions, kids are losing many interpersonal skills they’d have gained through face-to-face interactions or phone calls. This is where camp comes in. Because there is no technology for campers at camp, kids are able to truly be with each other. They talk, laugh, tell stories, and really learn the proper way to interact with one another. Whether in times of happiness or times of conflict, campers gain the ability to better navigate their relationships.

Camp Allows Kids to Focus on the Moment

We often take for granted the fact that we have a “super-computer” in our pocket at all times in the form of a smartphone. This is especially true for kids, who have only ever known a life where technology is readily accessible. But while smartphones are advantageous in an immeasurable number of ways, they also create a very large distraction. Kids are constantly immersed in their screen — surfing the web, perusing their preferred social media feed, or “Snapping” their numerous Snapchat friends. With this, they lose the ability to be fully focused on the moment they are in. At camp, such is not the case. Campers are not allowed cell phones, which creates an environment where campers are engaged in their endeavors. Rather than being immersed in their phone screen, they are immersed in their activities, or their friends. While being fully focused on the moment, campers are able to get the most out of everything they do.

So as technology continues to advance and to weave its way into everyday life…do your kids a favor and send them to camp!